A building has been on this site since about 800AD. The first one was probably wooden. There have been lots of changes over the years with bits added on or demolished, especially when the tower fell down! The present roof was put on in the 1930s and the Church Rooms were added in the 1970s and added to again in the 1990s.

The church has been added to and modified many times over the years, both inside and out. 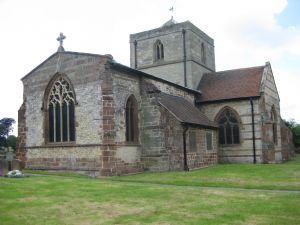 In 2005 we embarked, with English Heritage, on some much needed work, starting, as we were advised, with the outside. We have received grants which have enabled us to restore the stonework, windows and so on.

In 2019 we completed a major project to replace the internal floor and we took the opportunity to put in underfloor heating, a porch and new seating.

We unearthed the base of the Norman font and this is now visible under a glass window.

The church is often open in the afternoons from Easter to September - look for the 'Church Open Today' sign.

Someone from the church will be there to welcome you and show you around or leave you to wander on your own. There are information batons in each part of the church. People from the village and walkers are among the many different visitors.

When the church is open you are especially welcome to come and pray or just have some space to stop the think.